“ Listening is nothing less but the ‘royal route’ to the divine. ” …Dr. Alfred Tomatis

Ella Williams and the Listening Centre appear in a number of magazines, journals and interviews. The following links will be of interest to the press, journalists and those simply seeking to learn more about what we do. 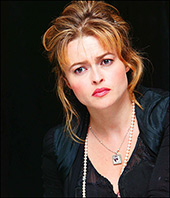 Helena Bonham Carter, alternative therapy devotee, tells Andrea Manzi-Davies how she resorted to fertility drugs in her quest to conceive a second child at 41.

She turned to Listening Therapy, where patients listen to Mozart and Gregorian chants to help them unwind. The theory is that by exposing the muscles of the middle ear to different frequencies, concentration improves and stress decreases.

Years ago, Bonham Carter used the therapy to learn a language for an acting role, and revisited it when she was expecting her first child.

During pregnancy, the technique is supposed to produce an alert, relaxed, and physically toned baby, and an easy delivery because it calms the mother. "That was absolutely the case for me with Billy," she says. "Billy was able to hold his head up at a very early stage, he was very laid-back, and although I love chubby babies, Billy has always been physically toned. I really think listening therapy might have helped a lot. The birth wasn't drama-free, but I felt very relaxed."

Listening therapy was developed by Alfred Tomatis, a French neurologist who now has 200 centres around the world. Patients are "taught" by listening to a series of music tapes over six months. This is said to re-educate the middle-ear muscles and aid concentration. It is used to help children with problems such as attention deficit disorder and autism, and is also offered to pregnant women to make them feel more relaxed. To view the full article visit: Telegraph Newspaper Online

The methods used by the Listeneing Centre (London), known as Listening Therapy, are based on the published works of Alfred A.Tomatis and use only the original analogue form of sound.